Katavanna – Vengeance will be Mine

Vengeance starts out the same as Havoc – go to Krasus’s landing, speak to Kayn (as for this character I’ve picked Kayn.) Before I begin, the talent preview: 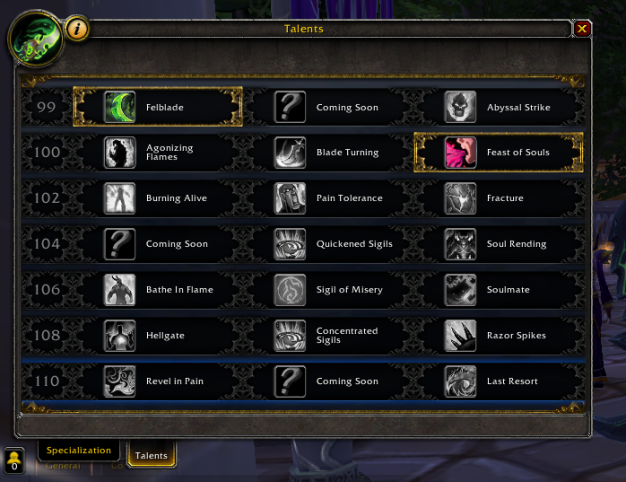 I don’t normally speak about the talents because I figure if folks want a run down, I can do that individually later, or they can check out http://mmo-champion.com  or http://wowhead.com for those. However, I do have to say the one thing I really don’t like about Vengeance compared to Havoc is the loss of Fel Rush. I like that double charge and the speeding around the map – the mobility is awesome and there are so many great things I can see a tank being able to do with that… except it’s not available if you’re a tank. Instead you get the target-able Infernal Strike, which is like Heroic Leap for warriors.

Unfortunately this made my choice in the first tier of talents pretty much Felblade as it’s a charge. I really like that rushing in. Anyway, that’s my .02! Also I went with Feast of Souls as it adds more healing to you as you go.

Anyway. On to the Artifact quest.  I’m directed to head to Khadgar to get something that will allow us to try and communicate with Allari who went to go and recover the Aldrachi Warblades which is the Vengeance artifact.

Khadgar is nice and friendly much like he is when you first meet him in Draenor. I was amused at the throw away line to Apexis Crystals as well. And of course, as always, Khadgar is his normal flippant self. “Don’t blow up the city, our repair bills are already high” – hah! So I find out that Allari is under attack and I head down to do something about it… alone, of course.

So I get to the Broken Isles, and Allari is in chains. I free her, and she tells me to go ahead. Now, before I go further, I do want to say that I love the fact that Allari is using a Scythe instead of warblades or glaives. I think it’s a fresh take on it, and back on Mardum she explained that it’s the Scythe of Souls or something to that effect. Still, enjoy the fact she’s different.

I move up the canyon and get attacked by Imps and these things called Aldrachi Soulwraiths. They hit for nothing but they keep coming and coming. That’s where you begin to see some of the insane strength in a DH tank – they can take AOE mobs and as long as they’re dying or you can use Soul Cleave, you are nigh immortal it feels like. Using my different skills (this is one place Infernal Strike is handy) I make it through the mobs. You are severely slowed as they hit you and you need to destroy some portals, so jumping through the area to the portals helps heaps.

You come across a pool of fel bile that you can’t cross without taking some damage. I think you’re supposed to be able to use Infernal Strike to get across, but when I tried it I took too much damage the second time I needed to target it across and died. So, I went around.  (Allari, for the record, did the fel rush across >.<)

So I then take out these twin Eredar, and a pit lord (Gorgonnash) rocks up and I have to tank him. I kill him and his infernal buddies, and then it’s time to move on. As any tank, even on live, I’ve learned that it takes just as long to kill multiple mobs sometimes as it does just one so I’m keen to take ‘em all on, especially with the Soul Cleave mechanic. I’m grinding my way to the top, taking little to no damage and basically just being this little Blood Elf badass. I’m really liking this class/spec combo, and I’m afraid the Soul Cleave is definitely going to get nerfed.

I take on the boss chick, falling into a hole along the way (of course… I’m good at this) and then kill her. She’s an easy fight really. I claim these Warblades (which are similar to the Fist of the Deity which has long been complimented to be one of the best looking weapons in the game!) and I head back to Dalaran. (The on equip makes Soul Cleave even MORE amazing, wow.)

Once you get back to Dalaran, you head to the Fel Hammer, do your thing there, take it over and unlock the forge. I did notice the Warblades didn’t have much in the way of in-game talents so far available – I believe this will be changing in the future.

So from here, I’ve elected to go check out Highmountain, and I will definitely be placing this class/spec combination in the ‘to be watched’ pile.  I enjoyed it heaps! 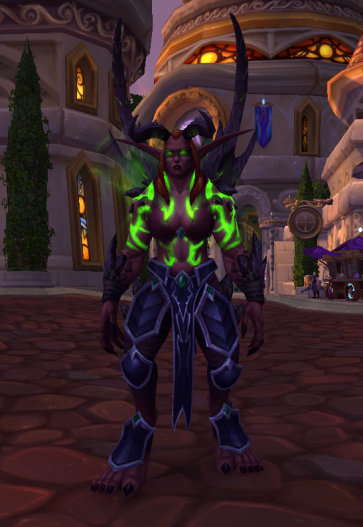